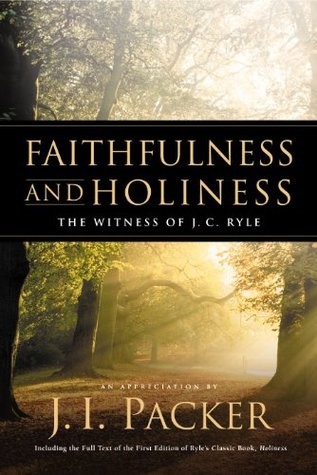 This past Sunday, I spoke about Paul’s desire to be faithful in holiness while ministering in Thessalonica. As they watched him work his ‘day’ job, they witnessed a difference to the way he lived compared to the way others lived. By working hard at his trade and treating others fairly, Paul would be demonstrating a dependence on the word of God (as he practiced obedience to ethical living) and a dependence upon God’s provision (as he relied upon God to provide his needs rather than leaning upon his own ingenuity). His desire to be righteous before others was a key component in attracting the Thessalonian believers to a life in Christ.

So what about us, where do we start? I want to introduce you a resource that has blessed by life for the past fifteen years as I strove toward holiness. It is the book, Holiness by J.C. Ryle (1816-1900). Ryle was the first bishop of Liverpool. When he was presented to the diocese of one of the largest cities in Britain, he had few resources and much opposition to his evangelical ministry, Most thought he would fail. But Ryle was a man who completely placed his dependence upon God. And by doing so inspired an entire generation of young ministers. He was a tireless worker who did much to advance the Gospel in Liverpool.

It is amazing that Ryle found the time to write as much as he did. But by far, his most popular work was Holiness. Its message is just as relevant today as was in 1877 when it was first published. People in the modern era are surprised at how easy it is to read and that his message is just as applicable in the second millennium. It has endured for over a century now inspiring many generations of English speakers. I would encourage you to read it. You can download a free copy of the book in pdf from http://www.apuritansmind.com/wp-content/uploads/FREEEBOOKS/Holiness-J.C.Ryle.pdf . But a better option is to purchase this edition from Amazon https://www.amazon.com/Faithfulness-Holiness-Including-Classic-Redesign/dp/1433515822/ref=sr_1_1?ie=UTF8&qid=1489518886&sr=8-1&keywords=faithfulness+and+holiness . J.I. Packer has written a wonderful introduction to the work with a biographical overview of Ryles’ life.

Elder Response to the Report on Sexual Abuse in the SBC

What Pastor Blair Has Been Reading (January 2022 through March 2022)

Getting the Most Out of Our Annual Psalm

Wonderful Weeks of Reflection and Worship

Back in the Saddle Again (But with a Little More Clarity)

Gone But Not Forgotten

Summer Prayer Meetings (and why you should be there)

A Great Way To Serve!

When a leader lets you down …

An Open Letter To a Discouraged Saint

Did the Grinch Steal Christmas?

Regretting What I Didn’t Say

Curiosities, Novelties and the Bible

An Update on our COVID-19 Protocols

The Convictions of a Pastor Over Racism

Preparing Your Heart for Worship: What Are You Here For?

Preparing Your Heart For Worship: Help I am Just a Volunteer

Preparing Your Heart For Worship: What do I do with my kid?

Preparing Your Heart For Worship: Loving Your Neighbor

Preparing your Heart for Public Worship: Embracing the Awkward

Why we are suspending the Lords Supper for the present crisis

Having God Speak to You On a Regular Basis

The Voice that Will Not Be Silenced

6 Members Who Build Up the Church

Supper and then Supper!

‘Evangelicals and the Bible’ A History Symposium to honor David Bebbington

A Time to Rejoice

The Move is On!

Opening eyes and hearts to help the poor

Is it wrong to charge interests?

The Blessing of Gifted Friends

Don’t let these two important events pass by you!

Further thoughts on the temptation of Eve (and a clarification)

Another word on gossip

A God Bigger Than Our Fears

The Wisdom of Reading Proverbs

Letters to the Pacific Rim

‘Adopting a child’ at the Boarding House

Working with our friends in Maine and Why it Matters

Eight ways to deal with your entertainment addiction (escaping from escapism)

What if I told you that you would win the publisher’s clearing house sweepstakes?

Preparing your heart for Resurrection Sunday

Serving the Lord through Monika Carroll

Being a Good Dad

Confessions of a ‘Good Dad’

How I was introduced to Indelible Grace?

Why You Should Come to the Annual Meeting

Being Thankful for You

When you don’t feel appreciated …

Marking the 500th Anniversary of the Protestant Reformation

New Sunday School Classes are set to begin in October!

How to help victims of Hurricane Harvey

Thinking About the Eclipse

How to have a successful K group experience

Save the Date- 500th Anniversary of the Protestant Reformation

Thinking of skipping church this week?

Be Prepared For Another Blessing This Sunday

A New Era at Providence